Surge protection is essential, and solar panels endure their authorized lifespan due to their large, exposed location. Lightning strikes can easily damage the sensitive components of photovoltaic equipment. Power surges can quickly cause damage to electrical equipment, and even catastrophic failures may occur. Inverters are very expensive, but in industrial applications, downtime costs and losses are quite expensive. In order to prevent high energy from generating high voltage Damascus through electronic equipment, all conductive tops must be directly grounded, and all wires (such as Ethernet cables, AC mains, etc.) that pass through the system must be connected to the ground with lightning arresters.

1. How will the surge affect the system?

The effects of electrical surges may cause immediate failure or long-term damage to the equipment. In order to retain the electrical system’s reliability, the SPD is typically installed on the consumer unit. In addition, other types of surge protection devices can be used to protect the installation from other incoming services. These services include telephone lines and cable television. It is important to realize that only ensuring the electrical installation, not other services, can allow transient voltage to penetrate into the system through another channel.

Install a type 1 lightning arrester at the power source (such as the main switchboard). On the sub-distribution board, you can place type 2 spd. (Combination types 1 and 2 spd are available, and people usually use it in consumer units.)

Alion Electric is one of the largest electrical appliance manufacturers in China. All lightning protection devices produced by Gaia are strictly implemented in accordance with the production process and international regulations. ALION has detailed files to ensure that there are no errors in the development, production, acceptance and sales of lightning protection equipment. 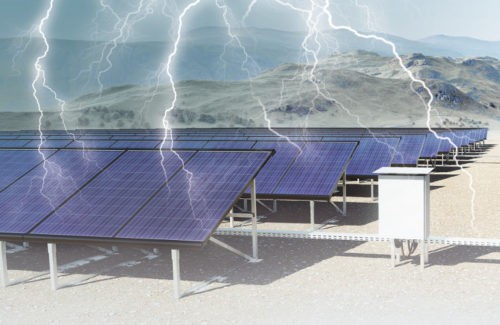 These photovoltaic systems utilize high system voltages of up to 1500 volts. The maximum power point is only a small fraction below the percentile of the system circuit current. In order to choose the correct SPD model for your photovoltaic system, you need to know the following:

When installing lightning protection equipment, you must understand the protection function of the external lightning protection system (LPS). The specified level of LPS determines whether the separation distance between isolation and non-isolation separates LPS and PV installations. The voltage protection level must be 20% lower than the dielectric strength of the terminal equipment to protect it. The key is to use SPD equipment to withstand currents that may be greater than the short-circuit current of the solar array string.

Risk assessment is a time-consuming and difficult process. First consider which places are the most vulnerable and which places are the least vulnerable. Then consider the SPD that best suits the type of building you plan to protect (if it has a single service entry switch). Lightning hit 90% of the earth. The most lightning strikes are on tropical land. There is basically no lightning in the North and South Pole, followed by the ocean, with only 0.1 to 1 lightning per square kilometer/year. Even if combat density (Ng) does not seem to be an issue, many countries, such as France, include Ng in their national standard NF C 15-100.

Although SPDs will not be tripped, the following events are likely to end their lives:

Due to the continuous excessive limitation of SPD, preventing thermal runaway caused by exceeding lightning characteristics may gradually damage internal components. The thermal fuse inside the surge protector provides the disconnect function of the surge protector.

Even though you may have to choose an external circuit breaker, more and more manufacturers include them in the same enclosure.

Choosing the right surge protection device for solar applications is a difficult task. This article aims to help you understand what SPDs are, how they work and why they are necessary for photovoltaic systems. When choosing a suitable surge protection device model, the most important thing to remember is that it is not only to protect your system from voltage shocks or power spikes; it is also related to preventing damage caused by overvoltage (overvoltage occurrence). Above the level that can cause voltage peaks).